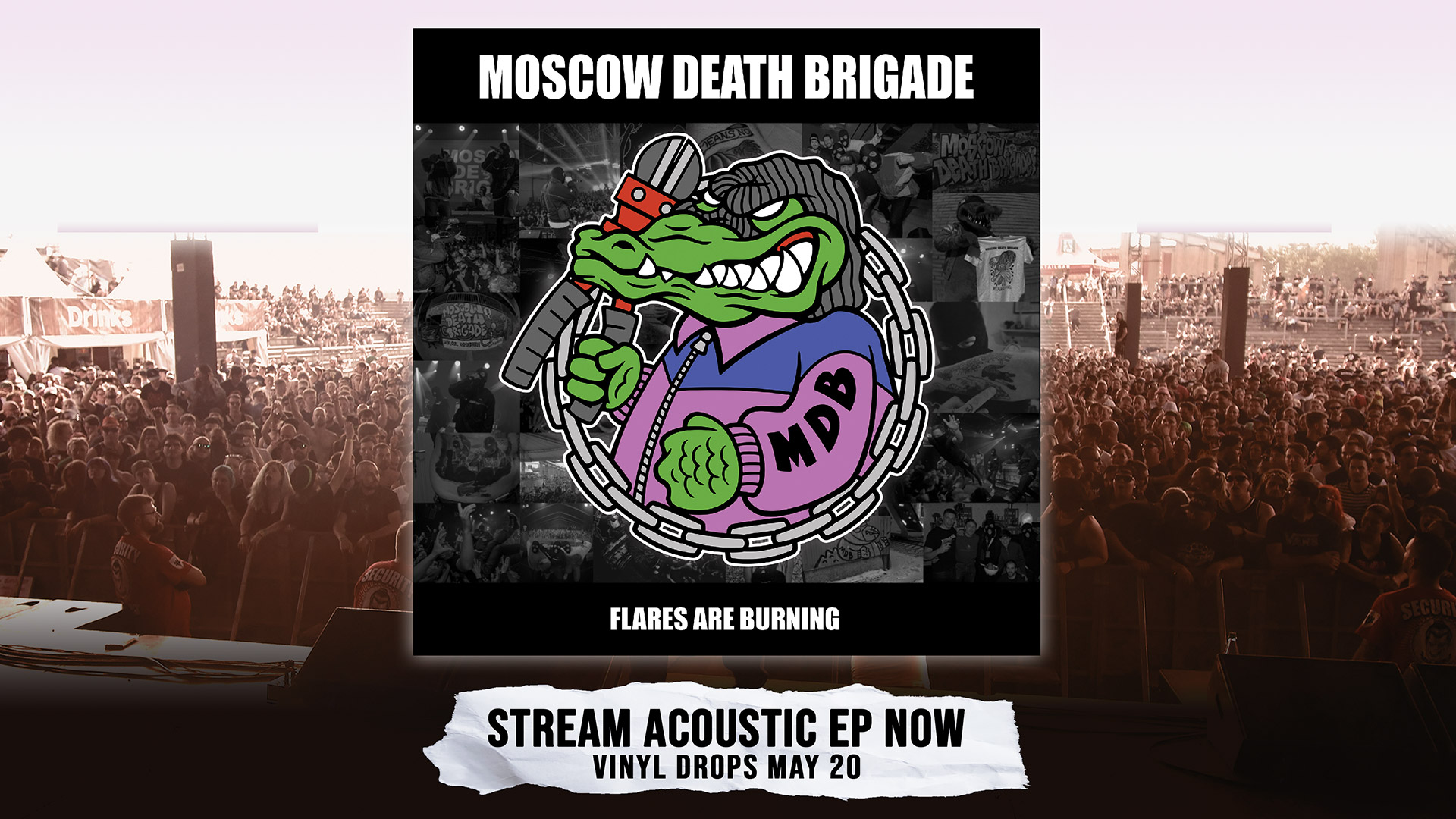 The balaclava-wearing techno/rap/punk crew MOSCOW DEATH BRIGADE from Russia have released their new EP titled FLARES ARE BURNING on digital platforms today. The 7″ vinyl will be released on May 20 via Fire and Flames Music (Germany) and Rebel Sound Records (USA).

The entire record is acoustic with the band’s MCs Boltcutter Vlad, Ski Mask G and Ghettoblaster G-Ruff rapping over acoustic guitar riffs and Russian balalaika and folk music-inspired solos. Despite moving away from electronic beats and electric guitars, MDB maintain their high-energy attitude with aggressive hip-hop rhymes and the whole gang bellowing anthem-like choruses. As always MDB lyrics that call for unity are inspired by street culture, graffiti, and struggles against hateful ideologies and injustices, while being peppered with a wide range of references from heavy metal and hip-hop artists to books, video games and movies.

The EP includes two tracks written especially for this record and two acoustic versions of popular MDB classics – Ghettoblaster and Sound of Sirens.

Tracklist:
1. Flares Are Burning
2. Ghettoblaster (Acoustic)
3. Against The World
4. Sound of Sirens (Acoustic)

Ski Mask G: “The titular track “FLARES ARE BURNING” talks about something that helps people to over come desperate situations and hard times, that burns like a flare in the darkness guiding you through the ocean of challenges and problems and inspiring you to keep fighting a good fight. Since the first days of MDB our main message was a call for unity, for creating a worldwide brother and sisterhood, since we believe that knowing that you are not alone, can guide a person through the hardest times. The EP was written and recorded during the Pandemic, when things are pretty bad and we think that it seeped into our music – it came out both hopeful and uplifting, but also mostly in a minor key with a dose of anger.”

The vinyl EP is available as a regular black edition and additionally as a limited silver edition, which will only be available through Fire and Flames Music and Coretex Records.

MOSCOW DEATH BRIGADE is a techno/rap/punk band from Russia that plays “Circle Pit Hip-Hop”: a unique and aggressive mix of electronic music, hardcore punk and rap, steeped in graffiti and street culture and flavored with a positive social message against war, racism and other kinds of discrimination. Initially created as a DIY team MDB has its roots in Russian progressive social movements and graffiti underground scene. In the last two years the band has raised thousands of Euro for different benefit causes, such as “Sisters” foundation in Russia and “Women in Exile” in Germany.